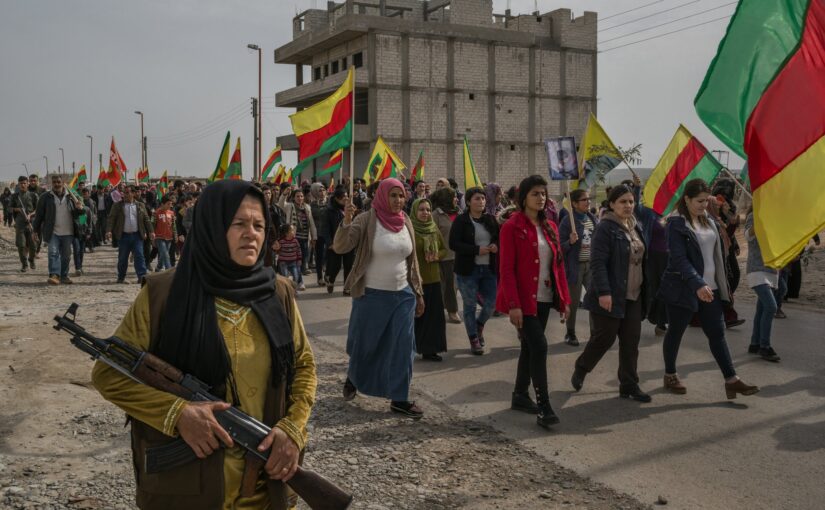 Recent history is increasingly being narrated as one of the rise of the radical right and authoritarianism in most parts of the world. It is also one where international organizations that are supposed to guarantee the universality of human rights are losing power, relevance and credibility. There is however, another story to be told. The last decade has witnessed some of the most crowded insurgencies that have flourished in all continents of the world that have not only protested dictators, exclusionary decision making processes, racism, genocide, neoliberal policies, ecocide and femicide among others; but also experimented with new ways of living, loving and relating. In these insurgencies –latest of which is currently occurring in India against Mondi’s agricultural policies that will leave many self-subsistence peasants devastated– people conjured up the commune and learned that in stateless spaces, hostilities and dualities give way to negotiations and diplomacy- in the Benjaminian sense.

Nevertheless and despite attracting millions of people, often insurgencies became defeated. In countries like Brazil, Turkey, Syria and Indonesia, the regime survived and increased its authoritarianism while in other places such as Egypt the win was short-lived giving way to other monstrous regimes. On the other hand, in places like Sudan or Tunis, where there have been partial redistributions of power,  the poor, youth and women still remained marginalized. Why is this the case? Obviously, and because it is so obvious we rarely mention it, as long the means of violence and self-defense are not distributed equally, it is impossible for oppositional masses to bring about revolutionary change. This does not mean that I am rooting for a violent conflict. On the contrary, violent conflict does not guarantee the equal distribution of the means of self-defense. Nor is an increased number of deaths desirable for any revolution which must be primarily based on joy and not on mourning and anger. What I am however suggesting is twofold. First at this point any uprising must see abolition as a necessary outcome. And abolition even in its most conservative definition-as the abolition of police, prison and repression- should be a basis on which an international alliance develops.

Second self-defense must be taken seriously by which I mean that it should become a primary conceptual tool for understanding social and political situations by asking the following questions:  What are the means of defense at any time, how are they distributed, what are the relations of defense and technologies of defense, what kind of means of defense can we generate and for how long would this self defense be sustainable? My take on self-defense relies on the thought of Abdullah Öcalan, the imprisoned leader of the Kurdish Freedom Movement.

For Öcalan, any society needs to fulfill the functions of nourishment, reproduction, and self-defense in order to survive. However, during the formation of capitalist modernity, state, capitalist classes, and men confiscated the means of nourishment (i.e., production), reproduction (i.e., care), and defense (i.e., violence) from society, the poor, and women, children, indigenous peoples and the enslaved. Marx, who understood the relevance of enslavement and genocide of indigenous and African peoples in order for capitalism to launch itself through European “investments,” prioritizes the relations over the means of production, Öcalan privileges the relations over the means of violence, where the former redefines the social meaning and effects of the latter. Violence (in capitalism and imperialism) becomes defense (in communism) when its means are equally distributed across society. What defines an ethical and political attitude toward violence in Öcalan’s thought is posed not in terms of how one is situated in relation to the question of violence versus nonviolence but in terms of how one is situated in relation to how oppressed people can defend themselves against those who monopolize violence. In a just and racial, class, gender-equal society, violence must be democratized along with production and reproduction, and their privatization and monopolization must be eliminated.

Defense is not only a question of police violence. Social relations are constantly in attack and society’s means of organization and self-governance, which are its most valuable defense mechanisms are continuously confiscated so that it becomes dependent on state, capitalism, racism and patriarchy.  The most obvious example is Covid 19. We have seen with Covid 19 that in order for the society to provide for its needs, the people in service and care sectors went out, worked and got sick, women took up the roles of teacher, nurse etc. at home and states closed national borders and applied repressive measures. Essential workers in countries built through racial capitalism were disproportionately vulnerable to lack of quality medical care and resources (vaccine). In a sense people were forced to invest in state, patriarchy and capitalism all the while recognizing the irrationality of each system.

Currently Covid 19 vaccination is organized in the most irrational way possible with northern countries competing over vaccines and southern countries not receiving any vaccine. Or like in Sudan northern countries are using the vaccine as an object of benevolence to further their influence. Wealth became more concentrated as the impoverished and workers lost jobs and homes and corporations increased profits. Obviously, until the whole world is vaccinated, the virus will keep mutating undermining the efficacy of existing vaccines. We have closed ourselves into a loop where we almost secure the longevity of the pandemic. We have to then ask ourselves: Why are we failing to defend ourselves? What are the means of defense against corona? If it is vaccination, how are the relations of vaccination structured? How can we transform it? What means do we have to transform it? What will the response be? How can we defend ourselves from possible responses by those who benefit from the existing relations?